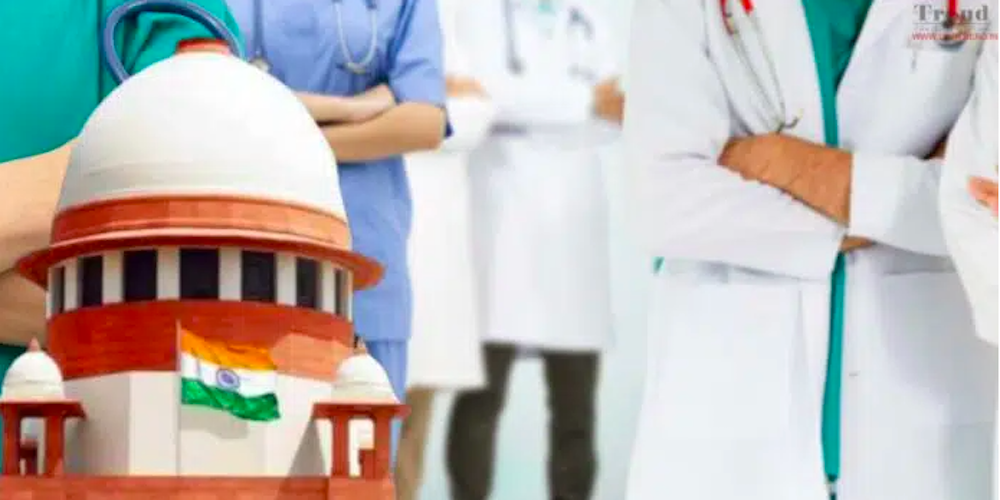 In a very major development with far reaching consequences, the Supreme Court as recently as on May 2, 2022 in an extremely laudable, learned, landmark and latest judgment titled Aravinth RA vs Secretary To Government Of India Ministry Of Health And Family Welfare in CA 3585-3586 of 2022 and cited in 2022 LiveLaw (SC) 473 has upheld the validity of Regulations 4(a)(ii), 4(b) & 4(c) of the National Medical Commission (Foreign Medical Graduate Licentiate) Regulations 2021, Schedule II 2(a) and 2(c)(i) of the National Medical Commission (Compulsory Rotating Medical Internship) Regulations, 2021. Of course, the Apex Court unequivocally held that the National Medical Commission has power to frame these Regulations for foreign medical graduates. The Bench comprising of Justice Hemant Gupta and Justice V Ramasubramanian observed that, “It is true that the country needs more doctors, but it needs really qualified doctors and not persons trained by institutions abroad, to test their skills only in their mother land.” The Court was considering an appeal challenging the Madras High Court which had earlier dismissed the writ petition filed by a student who wanted to join an Under Graduate Medical Course in Anna Medical College, Mauritius.

To start with, this brief, brilliant, bold and balanced judgment authored by Justice V Ramasubramanian for himself and Justice Hemant Gupta sets the ball rolling by first and foremost putting forth in para 1 that, “Aggrieved by the dismissal of his two writ petitions praying respectively for, (i) a declaration that Regulations 4(a)(i), 4(a)(ii), 4(b) & 4(c) of the National Medical Commission (Foreign Medical Graduate Licentiate) Regulations 2021, hereinafter referred to as ‘the Licentiate Regulations’; and (ii) a declaration that Schedule II 2(a) and 2(c)(i) of the National Medical Commission (Compulsory Rotating Medical Internship) Regulations, 2021, hereinafter referred to as “CRMI Regulations”) both published on 18.11.2021, are ultra vires and violative of Articles 14, 19(1)(g) and 21 of the Constitution, the writ petitioner before the Madras High Court has come up with the above appeals.”

Needless to say, the Bench then states in para 51 that, “As we have seen earlier, the appellant challenged the validity of Regulation 4(a)(i) and Regulation 4(a)(ii), 4(b) and 4(c) of the Licentiate Regulations on several grounds, one of which is the lack of power under the Act. But the provisions extracted above would show that NMC had the power to frame the above Regulations.”

Quite forthrightly, the Bench then postulates in para 52 that, “Prescription of minimum standards would certainly include the prescription of the minimum duration for a course. It may be open to the medical institutions of other countries to prescribe a duration of less than 54 months for the students of their country. But it is not necessary for the NMC and the Central Government to recognise foreign medical degrees of a lesser duration, if the incumbent wants to have permanent registration in India.”

Without mincing any words, the Bench then stipulates in para 53 that, “The prescription of an internship for a minimum duration of 12 months in the same foreign medical institution cannot also be said to be a duplication of internships. The purpose of internship is to test the ability of the students to apply their academic knowledge on their subjects, namely the patients. Medical institutions of other countries may not insist on rigorous internship for students who may not put to test their skills on the population of their country. But it is not necessary for us to follow suit.”

As a corollary, the Bench then also points out in para 54 that, “Similarly, the requirement under Regulation 4(b) has been necessitated to ensure that the students who were imparted medical education in a foreign country demonstrate their skills first on the population of the country where they studied. The necessity for a Master Chef to taste the food prepared by him, before it is served on the guests, cannot be said to be arbitrary. Therefore, the challenge to the Licentiate Regulations, are wholly without basis.”

While cutting across the appellant’s specious contention, the Bench then minces absolutely no words to hold in para 55 that, “The contention that Section 36(4) recognises M.B.B.S. courses of a duration of less than 54 months and that therefore the Licentiate Regulations being a subordinate legislation is ultra vires, is wholly unsustainable. All that subsection (4) of Section 36 saves, are the qualifications already recognised before the date of commencement of the Act and included in the Second Schedule and Part-II of the Third Schedule to the 1956 Act. The fact that past sins are sought to be washed away, is no ground to hold that there cannot be a course correction. As a matter of fact, Section 60 which deals with repeal and saving, also saves under clause (b) of subsection(2), any right, privilege or obligation already acquired. This cannot be stated to be in conflict with what is prescribed for the students of the future. In any case, Section 36 deals only with recognition of the foreign medical courses and not registration as medical practitioner. Registration is covered by Section 33. Therefore, Section 36(4) cannot help the appellant.”

Most significantly, the Bench then states in para 56 what forms the cornerstone of this learned judgment that, “The contention that the country needs more doctors and that by restricting the registration of foreign medical graduates, the fundamental right of the professionals under Article 19(1)(g) and the fundamental right of the citizens under Article 21 are impaired, is to be stated only to be rejected. It is true that the country needs more doctors, but it needs really qualified doctors and not persons trained by institutions abroad, to test their skills only in their mother land.”

Most remarkably, the Bench then expounds in para 58 that, “Insofar as the challenge to the CRMI Regulations are concerned, the same is without any substance. If there are institutions in some countries which offer primary medical qualification without mandatory internship, the students are supposed not to seek admissions in those institutions. The mad rush to become medical professionals, cannot drive them to countries where shortcuts to success are offered. The requirement under Para 2(a) of Schedule-II of these Regulations for foreign medical graduates is to ensure that only those who have acquired similar skills are allowed to practice Medicine.”

For sake of clarity, the Bench then seeks to clear the air by pointing out clearly in para 59 that, “The prescription in para 2(c)(i) of Schedule-II of these Regulations that such foreign medical graduates may be posted first in colleges which have been newly opened and have yet to be recognised, is a prescription of necessity. All medical institutions of the country are equipped to provide internships only to as many students as their permitted intake may allow. Therefore, this Regulation is intended to ensure that an undue burden is not cast upon the already recognised institutions.”

As a corollary, the Bench then holds in para 60 that, “Therefore, we find that the dismissal of the writ petitions filed by the appellant before the Madras High Court was fully justified. We could have dismissed the SLPs in limine, but we thought fit to take pains to bring on record the historical facts so that the challenge to these Regulations are nipped in the bud and they do not surface in a different form of avatar.”

Finally, the Bench then concludes by holding in para 61 that, “In view of the above, the appeals are dismissed. However, the costs imposed by the High Court of Madras upon the appellant is waived off, taking into account of the fact that he is a student and also for the purpose of showing the only extent to which, a court can show sympathy in such matters.”

All said and done, this recent, remarkable, robust, refreshing and rational judgment by the Apex Court has sought to send a very loud and clear message that the country needs really qualified doctors. It has also taken the most commendable stand of upholding the NMC Regulations for foreign medical graduates. It also made it clear that the NMC Regulations are not arbitrary. It also made it indubitably clear that it is not necessary for the NMC and the Central Government to recognise foreign medical degrees of a lesser duration. What really is most comforting to see is that the Apex Court has even though dismissed the appellant’s plea but it has waived off the costs imposed upon the appellant by the Madras High Court considering the fact that the appellant is just a student. No doubt, the Apex Court has done the right thing in doing so!