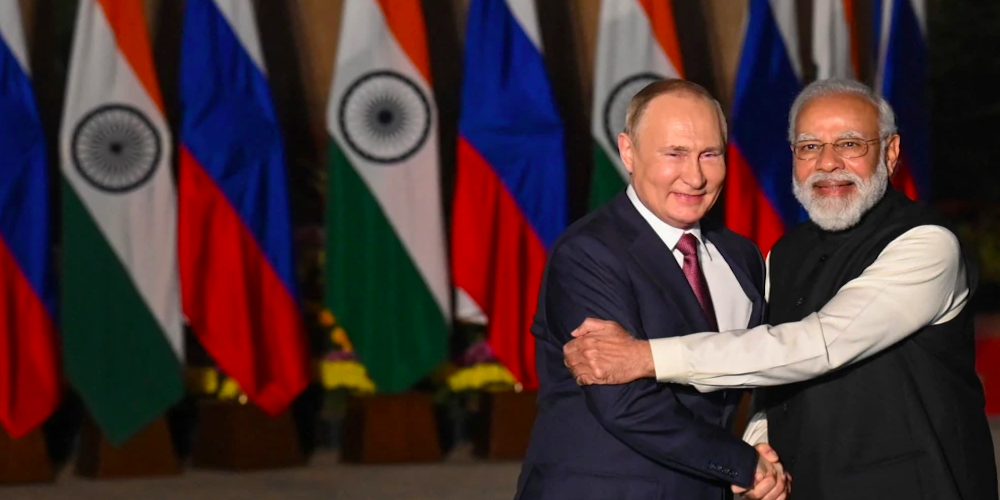 Despite the US and NATO countries in Europe having strong reservations about Delhi’s seemingly neutrality on the issue of Russian invasion of the Ukraine, there is now a growing realisation that they cannot alienate or antagonize a “global swing state ” like India that will play an increasingly important role in maintaining a stable geopolitical order in the world.

All told, the war in Ukraine does not alter the fact that there has already been a tectonic geopolitical shift in the world. During the Cold War, the central fault line in the global order was the US-USSR rivalry in Europe. Now, as India’s former national security Advisor Shiv Shankar argues (https://www.foreignaffairs.com/articles/united-states/2022-04-04/fantasy-free-world), “Europe is a sideshow to the main theater of geopolitical drama: Asia.” War in Ukraine is essentially a European War and it will remain so; but a war in Asia or the Indo-Pacific will change the global power dynamics.

According to Menon, “Today, the center of gravity of the world economy has moved from the Atlantic to east of the Urals. Geopolitical disputes and security dilemmas that could affect the global order are concentrated in maritime Asia. And the world seeks a new equilibrium to account for China’s rise. The complex political dynamics in Asia don’t lend themselves easily to the kind of stark confrontation underway in Ukraine. Policymakers in Western countries shouldn’t think that their actions on the new frontlines in Europe will shape the contours of a wider struggle to come. The war will not change the fundamental geopolitical dynamic in Asia, unless the United States becomes very distracted from its Indo-Pacific strategy”.

And here, it is China, not Russia, which is the principal rival to what the West stands for, be it ideology or national interests. And, in this competition, India is a natural ally of the West. A swing power like India gives an edge to the Western countries in the geopolitical competition with China. But, if India tilts towards China, the situation will be different.

It is the realisation of this fundamental geopolitical factor that explains why the Western countries have now changed their earlier harsh tone towards India’s neutrality on the war in Ukraine. Now there is a greater realisation and appreciation on their part of India’s “strategic autonomy” and national interests.

Besides, India and the United States conducted a highly successful meeting among their defence and foreign ministers (secretaries in American parlance) last month in the US capital Washington DC. US President Joe Biden and Indian Prime Minister Narendra Modi have held a virtual summit and the two will meet physically during the forthcoming G-7 summit in Germany, G-20 summit in Indonesia and QUAD summit in Tokyo shortly. On his part, Modi has just concluded a fruitful three-nation tour to Europe – Germany, Denmark and France. In fact, Modi is the first foreign leader whom the re-elected French President Emmanuel Jean-Michel Frédéric Macron has hosted.

It may be noted that “the global swing states” came to the geopolitical vocabulary, thanks to its creators Richard Fontaine and Daniel M. Kliman in their publication, “Global Swing States: Brazil, India, Indonesia, Turkey and the Future of International Order, (Washington, DC: Center for a New American Security and the German Marshall Fund of the United States, November 2012)” (http://www.cnas.org/globalswingstates). They argued that “swing states are those whose mixed political orientation gives them a greater impact than their population or economic output might warrant. Such states promise the highest return on investment for U.S.”

Their theory is based on the rationale that global swing states are nations that possess large and growing economies, occupy central positions in a region or stand at the hinge of multiple regions, and embrace democratic government at home. Increasingly active at the regional and global level, they desire changes to the existing international order but do not seek to scrap the interlocking web of global institutions, rules, and relationships that has fostered peace, prosperity and freedom for the past six decades.

Further, so runs the theory, in U.S. foreign policy, a focus on these nations can deliver a large geopolitical payoff because their approach to the international order is more fluid and open than that of more established powers like China or Russia. In addition, the choices they make—about whether to take on new global responsibilities, free ride on the efforts of established powers, or complicate the solving of key challenges — may, together, decisively influence the course of world affairs.

Fontaine and Daniel M. Kliman say that “India is the quintessential global swing state” because it is arguably the world’s third largest economy. Secondly, “sitting at the edge of the Middle East and East Asia, it occupies the majority of the South Asian landmass and has a land or maritime boundary with every state in the region, as well as China, Burma, Indonesia, and Thailand. Thirdly, democracy in India has endured with only a single brief interruption since independence in 1947.

They further argue that India now wants to play a major global role, “most evidenced by India’s ongoing quest for permanent membership in an enlarged UN Security Council”. Besides, “the best indicator is India’s approach to key pillars of the international order: trade, finance, maritime security, nonproliferation, and human rights. Looking at positions that New Delhi has taken in recent years, it is clear that India increasingly supports the global order. To give some concrete examples, India has invested in the International Monetary Fund, become a foreign aid donor, and accepted the U.S. dollar’s role at the center of the global financial system. It has emerged as a maritime power that champions freedom of navigation, combats piracy, and seeks to boost cooperation in the Indian Ocean region (Indo-Pacific). India has moved closer to key elements of the nonproliferation order: New Delhi now seeks membership in the Nuclear Suppliers Group and the other major multilateral export-control regimes and also supports the multilateral negotiation of a Fissile Material Cut-off Treaty. Although India has generally avoided singling out regimes for human rights violations, it now actively promotes the consolidation of democracy in transitional states, both through bilateral assistance and through contributions to the UN Democracy Fund.”

India has also been projected as a responsible power as it has always downplayed military adventurism or musclemanship in foreign policy practice and choices. Notice has been taken of India’s respect for territorial sovereignty for all nations and advocacy of rule-based governance and ‘security and growth for all’ in the Indo-Pacific region.

Patryk Kugiel, a Senior Analyst at the Polish Institute of International Affairs and member of the Europe-India Research and Dialogue Network (EIRDN) has also argued ( https://www.friendsofeurope.org/insights/india-as-the-global-swing-state-implications-for-europe/) , that though a swing power like India is not a formal ally of Europe, it is still an indispensable partner on many key issues. Whether it is strengthening regional order in Asia or maritime security in the Indian Ocean, or building stability in Afghanistan, the EU and India are mostly on the same page. They share both threats assessments (be it on terrorism, climate change, trade protectionism, or some of China’s policies) and global goals (sustainable connectivity, multilateralism, reform of the UN, stability in Middle East to name a few). These offer a lot of space for a much closer strategic cooperation than is the case today.

Viewed thus, Kugiel has suggested that “in its approach towards India, the EU should also consider how India’s role as ‘global swing power’, along with its increasing economic might, will impact the international system. Stronger cooperation with India will be crucial for addressing global challenges and establishing new rules and institutions.”

That the West, particularly the US, wants India in its side to face the Chinese challenge has been recognised by Chinese scholars like Lian Bo of the Shanghai University (A Shaky “Wedge”: An Analysis of India’s Strategic Behavior under the US “Indo-Pacific” Strategy (worldscientific.com) ). Instead of describing India as a Swing State, Lian prefers to describe India as “the target country” of America’s “Wedging Strategy”.

In essence, Lian’s thesis is that since the America-led “liberalism international order” is facing great challenges on representativeness and adaptability by many countries like China, Russia and India and since despite their many divergences, China and India have had effective cooperation by means of BRICs, Shanghai Cooperation Organization (SCO) and Asian Infrastructure Investment Bank (AIIB) which are all not dominated by the Western countries, “America’s wedging strategy is to isolate China by preventing the emergence of strategic alliance or strategic cooperation in Asia with an ambition of revision of international order and reducing the shock brought by China’s rise to US-dominated Indo-Pacific order. India is the target country of the wedging strategy”.

In a sense, this wedging strategy of keeping the swing power like India in its side is also applicable to Russia as far as the US or any European power is concerned. All told, India’s security and intelligence ties with the United States have increased manifold over the recent years. So much so that Russia, which accounted for 88 percent of Indian arms imports in 2002, has this share declined to 35 percent by 2020. On the other hand, India’s arms trade with the United States and its Western allies accounted for 65 percent during the same period. The point is that India is diversifying its arms imports; it no longer is focusing on Russian platforms.

This being the case, any undue criticism of India for its silence on Russian invasion of Ukraine will boomerang for the long term Western interests. It does not make any sense to push a swing power like India to the Chinese or the Russo-Chinese camp.