Modi a big hero for the Diaspora in Germany 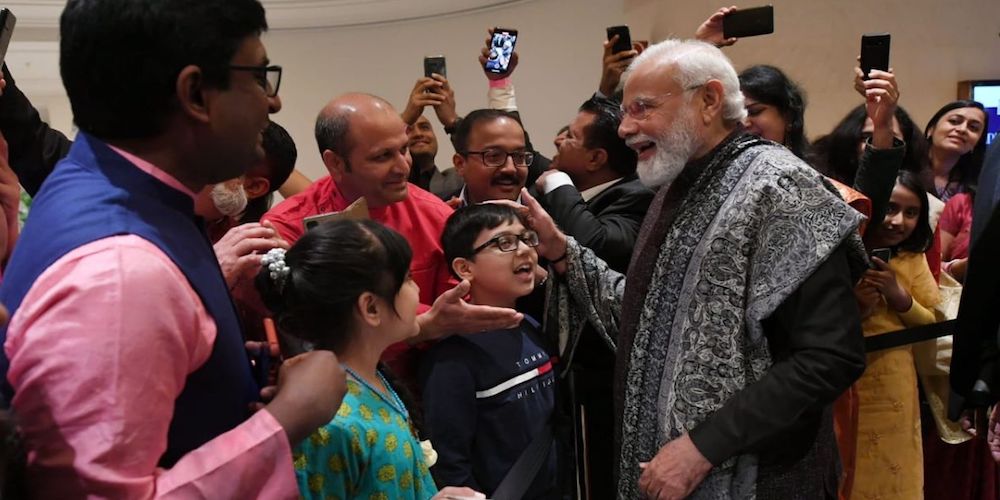 As has been the case with many of his foreign visits during the last eight years, Prime Minister Narendra Modi addressed and interacted with the Indian community in Germany at the Theatre am Potsdamer Platz, Berlin on May 2.

He is on a three-nation visit (Germany, Denmark and France) to Europe now, his first foreign visit this year.

More than 1600 members of the vibrant Indian community in Germany consisting of students, researchers and professionals participated in the event.

The Prime Minister noted their contribution to Germany’s economy and society and enthused them to contribute to India’s “Vocal for Local” initiative by promoting Indian products globally.

He spoke about how India is transforming through reforms, a revolution in the country in digital space.

Here are the key points from his address:

– New India doesn’t think of a secure future alone. It takes risks, it innovates, it incubates. I remember that around 2014, our country had only 200-400 startups. Today, the country has more than 68,000 startups.Today, all global parameters say that several dozens of these startups have become unicorns. It’s not restricted to unicorns alone, today I can proudly say that numerous unicorns in my country are becoming decacorns too. It means they are crossing the level of USD 10 Billion. Today, Govt isn’t chaining down the innovators, it’s pushing them forward by pumping vigour in them. If you want to innovate in geospatial area, or build new kinds of drones or rockets or satellites – today India offers the most open and nurturing environment for this.

– The price of Internet data is so low in India that it is unbelievable for many nations. Last year, India’s share was 40% in Real-time global digital payments.

– Before 2014, wherever you used to see, everything would be a work in progress.I’m not criticising anyone but if a road was made, then it’s dug up for electricity, then for water. To end this, we’ve made PM Gati Shakti master plan to bring all stakeholders to one platform.

– After independence, the country decided a path, a direction. But the numerous changes that should have taken place with time, the speed with which it should have been done, the extensive manner in which it should have been done, we lagged behind due to one or the other reason. Due to the traditions of the British, there was a wide gap of trust between government and people. There were clouds of doubt as there was an absence of speed needed to change what was seen during British rule. It was demand of time that presence of Govt go down in the life of common people. Minimum government, maximum governance!

– There should not be the absence of government wherever it is needed but it should also not be wherever it is not needed. Through reforms, we are transforming the country. For reform, political will is needed. Today India is moving forward in all fields including quality of life, quality of education & others.

– The country, bureaucracy, government offices are same but now we are getting better results. The people of India ended the politically unstable atmosphere of the last three decades by pressing a button. After 30 years a full majority govt was elected in 2014 and the people of India made the government stronger in 2019.

– We’re celebrating 75 yrs of independence this year. I’m the first PM who was born in independent India. The peak on which India would be at the time it celebrates 100 years of independence, India is strongly taking step after step &walking swiftly toward that goal. Today, I’m here to neither talk about myself nor Modi Govt. I want to talk to you about the capabilities of crores of Indians & sing their praises.

– When I speak about crores of Indians, it includes not only the people who live there but also those who live here. My words include all the children of Maa Bharati who live in every corner of the world. I’m fortunate that I received the opportunity to meet the children of ‘Maa Bharti’ in Germany. It feels great to meet all of you. Many of you’ve come here, to Berlin, from different cities in Germany.

The number of Indian Diaspora in Germany is supposed to grow further, it is said. There are two broad statistical indicators of migration for any country: inflows and stocks. Inflows data capture the number of new permits issued in a year. Stocks data estimate the number of permits held at the end of the year. A given country may have large inflows of migrants, but small migrant stocks, or vice versa. Large stocks indicate that a country received large inflows in the past. In 2018, Germany had smaller stocks but larger inflows of Indian migrants.

In Europe, Germany has become the second most important destination for Indian migrants after the UK.

In the past few years the migration and development debate has increasingly been examining measures to maximize the impact of diaspora engagement on development in countries of origin. Governments on both sides of the migration chain increasingly recognize the value of the diasporas’ voluntary engagement with their countries of origin and are seeking ways to optimize this engagement. The question facing policymakers is not so much whether the diaspora can contribute to their countries of origin, but what kind of government policies and programmes can foster and promote these relationships. Several countries have, therefore, attempted to formulate polices of diaspora engagement to use their overseas communities as a resource for development. Such polices range from securing better welfare conditions for their migrants abroad to promoting investment and contributions to development.