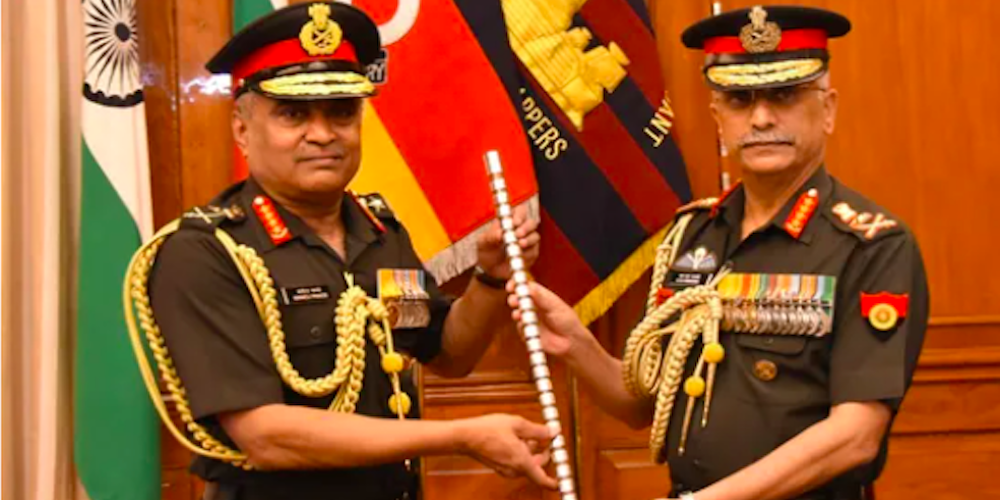 Lieutenant General Manoj Pande will take over as the 29th Chief of the Indian Army Staff (COAS) tomorrow (May 1) , replacing General Manoj Mukund Naravane, who was in charge of the top post since December 31, 2019.

The remarkable aspect of General Pande heading the 1.4 million-strong Indian Army, the world’s second largest, is that he is the first engineer to do so. He belongs to the Army’s Corps of Engineers.

In fact, an engineer heading the Indian Army has drawn skepticism from some conservative quarters. Because, so far Indian Army Chiefs have been from the infantry, armoured corps and artillery. Statistically speaking, the Infantry has produced maximum COAS (60.7%), followed by the Armoured corps (21.4%) and Artillery (17.8%).

Those days, the political authorities were strictly going by the principle of seniority in appointing the heads of the military, judicial and civilian establishments. And that perhaps necessitated the extension to General Bewoor so that he would remain senior to Gen Bhagat at the time of appointment for the post of the COAS. But that principle of seniority for top jobs is no longer sacrosanct, whether in India or elsewhere in the world.

In fact, when Indira Gandhi was the Prime Minister of India, she had deviated from the principle of seniority when Justice AN Ray superseded three senior judges of the Supreme Court to become the Chief Justice in 1973. Again it was Indira Gandhi whose government in 1983 appointed General AS Vaidya as the Army Chief by superseding General SK Sinha.

In 2004, the Manmohan Singh government appointed Shyam Saran as the foreign secretary by superseding four senior officials in the Indian Foreign Service. But what it did in 2006 was even more eye-raising. It appointed Shivshankar Menon as foreign secretary, although 16 serving officers were senior to him; this was a decision that triggered a virtual rebellion in the Ministry of External Affairs, with many of the superseded diplomats deciding to quit the service.

In 2014, the same Manmohan Singh government appointed Admiral Robin Kumar Dhowan as the Navy Chief, bypassing Vice-Admiral Shekhar Sinha, the flag officer commander-in-chief of the Western Naval Command and the senior most Naval officer at that time. Admiral Sinha resigned from the service in what was believed to be a strong protest.

Of course, this time General Pande happens to be the senior most in the Indian Army to succeed COAS, General Navarane. But, given the past experience, it seems that his other qualifications, apart from being the senior most, have played a crucial role for General Pande’s elevation by the Modi government.

In fact, there is now an emerging school of thought in the military sphere that while efforts must be made to identify “tactical commanders” at battalion and brigade level, for higher posts officers with “strategic leadership” potentials should be rewarded. Strategic leadership includes attributes of being a “combat genius” (fighting beyond the plan, innovating as one fights, staying well ahead of the enemy in imaginative application of combat power); “political genius” ( wielding and melding the elements of military power with allies and politicians, mastering civil-military discourse); “institutional genius” ( managing a very large institution and making it relevant to the needs of the nation); and “anticipatory genius” (having the ability to think in time and imagine conceptually where the nature and character of war is headed).

Here, the “experience” suggests that those officers who had shown great tactical skill did not equal great strategic skill. Tactically talented officers can do a great job in making the convoys run on time, but they may not anticipate a battlefield that has yet to appear. On the other hand, those gifted with strategic foresights have often been found wanting in tactical maneuvers; they have been better at conceptualizing warfare rather than practicing it.

It is quite possible that apart from the seniority factor, the Modi government has taken into consideration General Pande’s two qualifications, based on his academic and professional experience. Because, these are relevant to the topmost priorities of the Government of India’s military planning at the moment.

One is the idea of “theaterisation” of the three services for future wars and operations. In essence, there are two reasons that are cited in favour of the creation of theatre-commands. At a time when the national economy is in a very bad shape, there has to be tightening of the belt by the three forces. Secondly, tightening of the belt has to be done in a manner that will not affect the combat capabilities of our forces. And, that, in turn, will be possible when all the assets belonging to all the services in a given theatre are marshalled together.

Incidentally, General Pande has the experience of heading one of the two joint commands that India has at the moment – the Andaman Nicobar Command and the Strategic Forces Command – where the Army, Air Force and the Navy work together. He was the commander-in-chief of the Andaman and Nicobar Command (CINCAN) from June 2020 to May 2021. This experience of general Pande could have been considered valuable by the Modi government.

The second plus point of General Pande that could have gone for his promotion is his engineering/technical background at a time when the current military thinking everywhere is focused on technological prowess. It is all the more so in case of India as it goes for massive modernization of its forces, with focus on indigenisation and self- reliance.

In fact, in February, General Pande had delivered an important lecture at the Army’s think-tank, Centre for Land and Warfare Studies (CLAWS). His speech was on “Contours of future wars and counter measures”. He had made some significant points.

He had talked of how the world is increasingly witnessing Grey Zone Warfare. “Grey Zone campaigns are typically built around non-military tools, as part of the tactics of remaining below key thresholds of response. The linkages between nation states in a technology-driven flat world will ensure that the strategic contest is limited, at least initially, to non-contact and non-kinetic measures. What was earlier ‘Cold War’, can at best be now defined as ‘Cold Peace’,” General Pande had said.

According to him, future warfare would essentially be fought across multiple domains by a joint force. “This force will operate in land, sea, air, cyber and space domains and must be fully integrated and enabled for dynamic responses. Modern warfare will see use of covert swarms of miniature spy drones, unmanned ground vehicles, missiles with adaptive guidance, sentry robots and offensive robotic systems.

“At the centre of it would be Artificial Intelligence (AI), or computer algorithms, that can perform many functions, such as vision, decision-making and ability to process vast quantities of information capabilities that are normally associated with humans. Will such decision making be successful? Or, will it only be an aid to be used at the discretion of decision makers, remains to be seen,” he had asked.

Interestingly, General Pande had highlighted in his speech how the future battlefield milieu, though being technology-centric, will also need a new kind of leader. “The new generation of warfare can be won by leaders who are creative, adaptive to technology and have developed decision making skills with profound professional knowledge.”

It seems the Modi government found merits in this line of thought and rewarded the General with the post of the COAS, thinking he would deliver what he had promised, given his technological background.