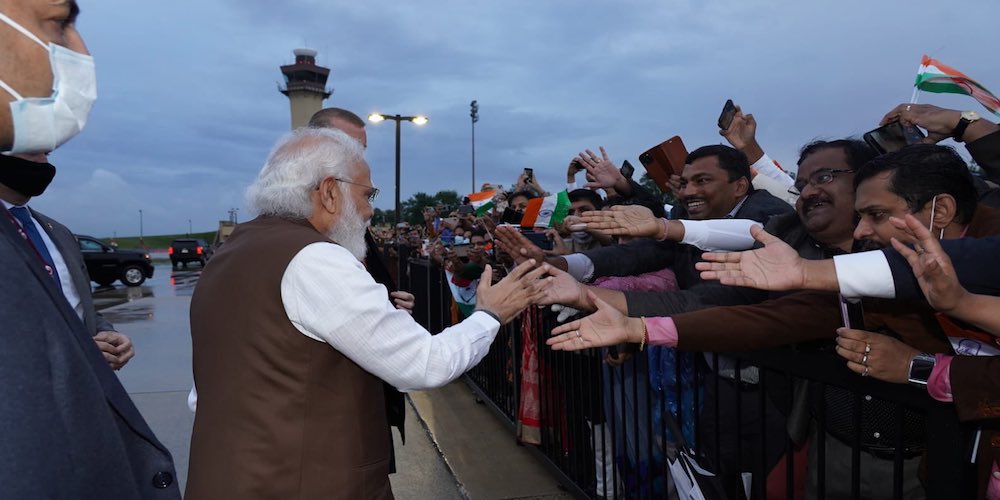 “Greetings to everyone, especially the Indian diaspora on Pravasi Bharatiya Diwas. Our diaspora has distinguished itself all over the world and has excelled in different spheres. At the same time, they have remained connected to their roots. We are proud of their accomplishments.”

As Prof. Jyotika Teckchandani rays, no other Prime Minister of India than Narendra Modi has recognised the role of Indian diaspora as a ‘strategic asset’ in the all round development of the our country. Jawaharlal Nehru, India’s first Prime Minister, pursued a policy of “active dissociation” from the Indian diaspora. He was concerned that connecting with, and advocating for, them would impair the sovereignty of host countries.

For years, we interacted with Indian community only on national days or other important occasions. Problems of diaspora were never given importance. Under the regime of Rajiv Gandhi, there was a boost in diaspora policy. However, the policy of reaching out to the Indian diaspora began in earnest during the tenure of Atal Bihari Vajpayee. It was under NDA-I that Pravasi Bharatiya Divas(PBD) was first launched in 2003.

For PM Modi, Diaspora is an ‘asset’ rather than a ‘liability’ and India’s intellectual power beyond borders is ‘brain gain’ and not ‘brain drain’. Towards this goal he not only took a whirlwind tour of the globe during the first term of his prime ministership to USA, UK, Australia, Canada, Singapore, Israel; meeting, appealing and motivating the Indian community abroad to reconnect with their Indian roots and play a critical role in the development of country. His interactions with Indian community at New York’s Madison Square Garden and Allphones Arena in Sydney, aimed at turning every Indian abroad into an ambassador.

He considered the Indian Diaspora as a valuable asset just like Jewish and Chinese Diaspora. It is no secret that Chinese diaspora had played a seminal role in 1990s in the economic transformation of China by investing in the rural and semi-urban township on the basis of trust, understanding of culture and networking.

The Chinese diaspora further help in globalising the Chinese trade through its global network. PM Modi too wants to transform the Indian diaspora into a ‘strategic asset’ and expect from them to play a role of facilitator in the globalising the Indian trade/export through their global network and bring investment across many small cities of the country. It is in this sense that while inaugurating the 16th Pravasi Bharatiya Divas (PBD) on 9th January 2021 that PM Modi called for the decisive role of PBD in the building of “Atmanirbhar Bharat”. PBD is celebrated once in every two years to strengthen the engagement of the overseas Indian community with the Government of India and reconnect them with their roots. During these conventions, selected overseas Indians are also honored with the prestigious Pravasi Bharatiya Samman Award to recognize their contributions to various fields both in India and abroad.

Today Indian diaspora with its 18 million number across 136 countries is considered the largest diaspora community in the world, bringing highest amount of remittance i.e. $87 billion in 2021 in the world, of which the largest percentage comes from the Gulf countries. In other words, Indians contribute 13% of global remittances and the remittance sent by Indians back to India amount to approximately 3.2% of the Indian GDP. Similarly, their contribution to the country of residence is also noteworthy. For e.g., the Indian diaspora in UK is almost 1.8% of the total population of UK, but it contributes almost 6% of the total GDP of UK.

It is not without reason that PM Modi clearly recognised and lauded the contribution of PBD during Covid times, which makes India stand firm and tall in the world. Amidst the deepening economic crisis due to COVID-19, the PM Modi successfully launched the world largest vaccination programme in the country and also helped other Asian and African countries.

Indian diaspora has come a long way to play a significant role in keeping India at the centre of global affairs. First, it is well poised to contribute towards global supply chains. Self-reliant India envisions India as a contributor to the world and a part of Covid crisis has shown the perils of being dependent upon foreign sources for raw materials and intermediate products. Thus, the direction of self-reliance is towards creating alternate supply chains.

Second, the outflow of the Indian diaspora has positively transformed the perception of the world towards the India. The dominance of Indians in computer software, particularly in the Silicon Valley, has strengthened the image of India as a technology powerhouse and a source of quality human resources. Sundar Pichai, Satya Nadella, Indra Nooyi, Vinod Khosla, Deepak Chopra and many others have reached the highest echelons in their respective sectors.

Third, with focus on ‘Make in India’, Indian diaspora can be facilitated to contribute to the Indian development story by investing in the greenfield and brownfield projects, as well as, portfolio investments in India. Similarly, the Indian diaspora is expected to guide the policy-makers in the field of the Artificial Intelligence-driven industry which will create high-value jobs.

Thus the government has facilitated the rules and regulations that have significantly improved Indian ranking in ease of doing business from 130 to 66 in 2020.

This creates a favorable environment for businesses to invest in India and also gives an opportunity to the diaspora to confidently create an outreach strategy in their areas of influence.

Similarly, the Modi government has brought the merger of PIO (Persons of Indian Origin) and OCI (Overseas Citizenship of India), which has been a long-standing demand of the Indian community.

Along with that, the Indian government has accorded many advantages to the OCIs by including them in the definition of Indian management control, in the context of sensitive industries. This will create investment opportunities for the diaspora.

Further, Indian government is in the process of launching awareness generation portals like the Global Pravasi Rishta portal, to provide an instrument of connecting with the diaspora. It will be a dynamic communication platform to connect the diaspora with the Ministry of foreign affairs, Indian missions and the Indian diaspora abroad.